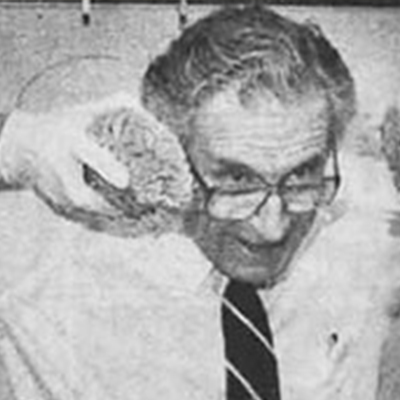 Arnold “Arne” Scheibel was born in New York City in 1923 where he lived for the first 24 years of his life. He did his undergraduate work at Columbia College and received his Doctor of Medicine degree from Columbia College of Physicians and Surgeons in 1946. Though initially interested in cardiology, Dr. Schiebel perceived an apparent pervasiveness of emotional factors in cardiac disease patterns. This led him to the field of psychiatry. After a year of psychiatric residency training at Washington University in St. Louis, he entered the Army as a medical officer and received further training while on active service at Brooke General Hospital in San Antonio.

Increasingly troubled by the lack of knowledge about brain substrates of psychiatric syndromology, Scheibel joined the neurophysiology laboratory of Warren McCulloch at Illinois Neuropsychiatric Institute to learn something about brain structure and function. Here, for the first time, he read some of the work of Camillo Golgi and Santiago Ramon y Cajal and discovered the structural beauty of the central nervous system as revealed by the silver chromate methods of Golgi. Today, more than half a century later, although largely superseded by more discriminative techniques, the Golgi still remains the “gold standard” against which all neurohistological techniques are measured.

After a short period as faculty member at the University of Tennessee and 15 months spent abroad (Universities of Pisa and Oslo) on a Guggenheim fellowship, Scheibel joined the faculty of the University of California at Los Angeles as a member of the departments of anatomy and psychiatry (1955).

Scheibel’s research, stemming from his interests in both psychiatry and the neural underpinnings of behavior, has revolved about the structuro-functional basis of cognition and action. Using both neurohistological and neurophysiological techniques, his laboratory has studied the reticular core of the brain stem and thalamus, the organization of neural modules, structural correlates of aging and psychosis, and the relation between levels of cognitive activity and the patterns and richness of neuropil.

Scheibel had the privilege of serving as Acting Director (1987-1990) and Director (1990-1995) of the Brain Research Institute during a period of economic stress — a period in which the continued existence of the institute itself was under question. Despite this, Scheibel’s leadership kept the BRI alive, and led to innovative programs including a system of affinity groups — working groups that meet regularly to discuss crosscutting topics. Since inception, these affinity groups have resulted in the submission and funding of several training program and program project grants, including the one that created the Alzheimer’s Disease Center. In turn, affinity groups have led to Integrative Centers of Neuroscience Excellence. These centers provide a more formal, cohesive identity and organizational structure that facilitates collaborations and interactions amongst a large community of researchers from disciplines across campus, including faculty, post-doctoral fellows and graduate students.  Scheibel also initiated the student-manned community outreach program, Project Brainstorm — a program that allows UCLA students to teach neuroscience concepts to Los Angeles Unified School District classes, ages K-12.

Dr. Schiebel’s inspirational teaching style has inspired generations of neuroscience scholars, from the children who participate in Project Brainstorm, through post-doctoral students and faculty.