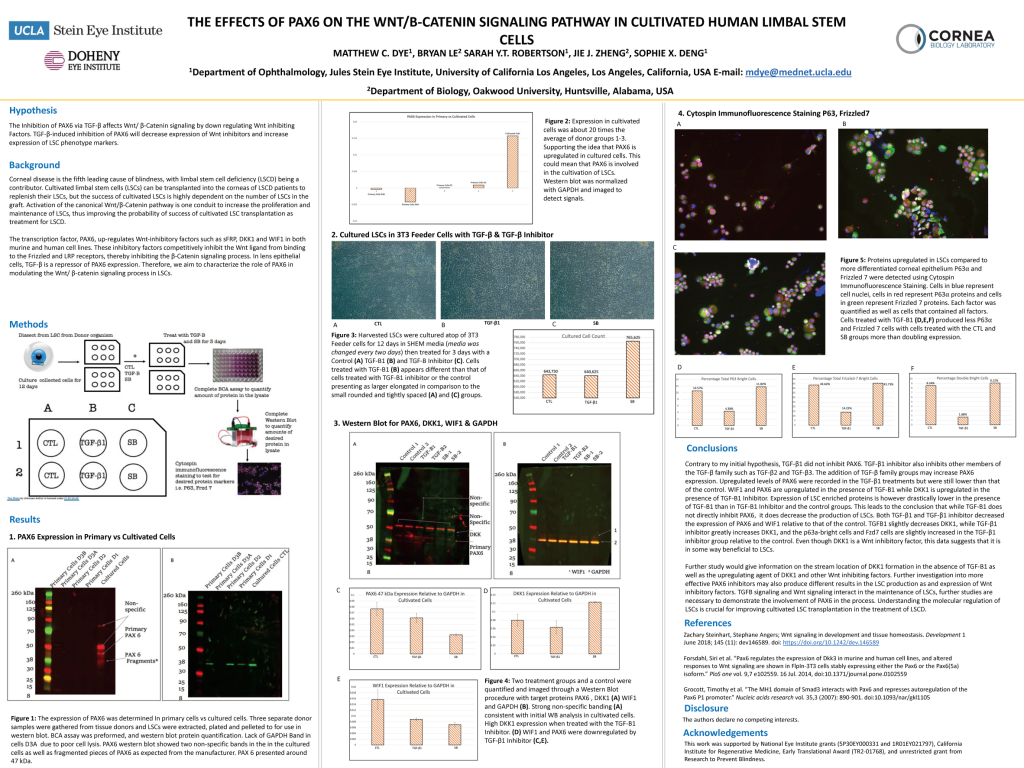 Corneal disease is the fifth leading cause of blindness, with limbal stem cell deficiency (LSCD) being a contributor. Cultivated limbal stem cells (LSCs) can be transplanted into the corneas of LSCD patients to replenish their LSCs, but the success of cultivated LSCs is highly dependent on the number of LSCs in the graft. Activation of the canonical Wnt/β-Catenin pathway is one conduit to increase the proliferation and maintenance of LSCs, thus improving the probability of success of cultivated LSC transplantation as treatment for LSCD. The transcription factor, PAX6, up-regulates Wnt-inhibitory factors such as sFRP, DKK1 and WIF1 i. These inhibitory factors competitively inhibit the Wnt ligand from binding to the Frizzled and LRP receptors, thereby inhibiting the β-Catenin signaling process. In lens epithelial cells, TGF-β is a repressor of PAX6 expression. Therefore, we aim to characterize the role of PAX6 in modulating the Wnt/ β-catenin signaling process in LSCs. I hypothesize that TGF-β-induced inhibition of PAX6 will decrease expression of Wnt inhibitors and increase expression of LSC phenotype markers. To test my hypothesis, cultivated LSCs were treated with TGF-β1 and TGF-β inhibitor and tested for the expression of Wnt inhibitory factors sFRP, DKK1, and WIF1 as well as LSC phenotypic markers P63α and K12/K14. Preliminary data demonstrates PAX6 is highly expressed in cultivated LSCs compared to primary limbal cells. This suggests a role for PAX6 in cultivated LSCs and further investigation will elucidate PAX6 role in the maintenance of cultivated LSCs.