We gratefully acknowledge the generous donations received from private donors and foundations since the Brain Research Institute was established in 1959. Though the BRI has been funded as an organized research unit, these gifts have been essential in maintaining and expanding the resources necessary to fulfill the increasing needs of the institute’s research, education and outreach missions and the facilities that make them possible.

The Gonda (Goldschmied) Neuroscience and Genetics Research Center is home to the UCLA Brain Research Institute and the Department of Human Genetics. Since it opened in 1998, this state-of- the-art facility has served to maximize creative neuroscience and genetics research at UCLA and attract outstanding young scientists to lead research forward through the 21 st  century.

Currently occupied by 30 faculty, 21 innovative laboratories and 2 core facilities, the Gonda center incorporates an array of cutting edge research technology allowing basic science investigations that advance understanding of the brain, and translate findings into medical research strategies that impact treatments for human disease. In 2016 alone, faculty based in the Gonda center generated over 150 journal publications validating the impact and importance of their scientific investigations.

The Gonda center’s existence is the result of the vision and generosity of Leslie and Susan Gonda. The Gondas’ $45 million gift is one of the largest donations from an individual benefactor in the history of UCLA and one of the largest ever received by the University of California.

As Leslie Gonda explained, he and Susan were born in Hungary. After escaping from the Komarom forced labor camp in 1944, Leslie took the name Gonda in order to escape Hitler’s tyranny. Susan survived internment at Auschwitz. After the war was over, they married in Switzerland, and created a new life for their growing family in Venezuela and later in Los Angeles.

In 1988, the Leslie and Susan Gonda (Goldschmied) Foundation was created as a dedication to the memory of family members lost during the Holocaust. The Foundation has established centers, laboratories and endowments to meet the needs of vascular, diabetes, genetic and neuroscience research at major medical institutions around the globe.

Leslie and Susan Gonda believed that through education and advances in medicine, generations now and in the future will be able to meet the challenges of an increasingly competitive world and lead productive, meaningful lives. Through their generosity, the Gondas created a family legacy of charitable giving. Their leadership gift to UCLA ranks as one of the most significant contributions in the history of American philanthropy. Susan passed away in 2009 and Leslie in 2018. 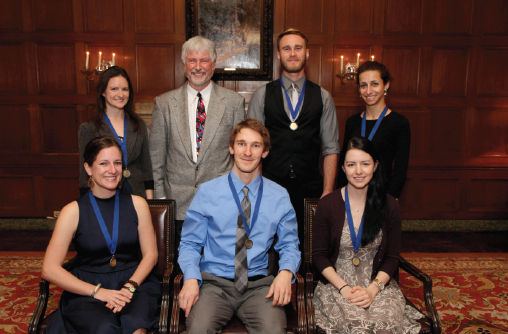 Since 1958 when Advancing Science in America Foundation created the Achievement Rewards for College Scientists (ARCS) in Los Angeles, the organization has been an invaluable partner in one of the key components of the BRI’s mission: to provide the resources and support necessary to maximize the academic abilities and research accomplishments of neuroscience graduate students.

BRI Director Chris Evans says, “In the past, the students ARCS has supported have developed into outstanding researchers that continue to contribute to our understanding of and possible cures for brain disorders and injury. Because ARCS resources are allotted to individuals rather than tied to specific research projects, young scholars have been given the freedom to truly explore where their interests lie by training with UCLA faculty at the frontier of neuroscience research.”

Former ARCS scholar Kate Wassum, PhD, is now a BRI member and UCLA assistant professor in the department of psychology, where she is studying the neurochemistry of decision-making. At the time Wassum received the  ARCS award, she was uncertain of what the focus of her research would be. Eventually, Wassum focused on the mechanisms governing reward and motivation in the brain.

Jeffrey Bronstein, MD, PhD, is another former ARCS scholar. Now UCLA professor of molecular toxicology, neurology, Director of the UCLA Movement Clinic, and a BRI member, Bronstein’s work has been groundbreaking in the clinical and basic science of Parkinson’s disease. “I can think of no other organization that has contributed so unselfishly to foster and influence science and technology across the United States,” he says.

Among the principal forms of private support are endowed professorships or “chairs” and scholarships, which support the activities of distinguished members of the institute.

The Eleanor I. Leslie Term Chair in Innovative Brain Research

Giovanni Coppola is Associate Professor of Neurology, and Psychiatry & Biobehavioral Sciences. The overarching goal of his work is to advance understanding of the genetic architecture of neuropsychiatric disorders. In order to do this, he has adopted a combination of genetic, genomic, and bioinformatics approaches.

In the field of genetics, Dr. Coppola is resequencing neurodegeneration-related genes in a large series of patients with neurodegenerative conditions, including Alzheimer’s Disease (AD), Frontotemporal Dementia (FTD), and Progressive Supranuclear Palsy (PSP), in collaboration with the UCSF Memory and Aging Center, the UCLA Easton Center for Alzheimer’s Research and other collaborating Institutions. He is utilizing recent advances in sequencing technology to sequence whole genome sequencing in patients where causative mutations have not been identified. He is also interested in the genetics of neuropsychiatric disorders, including bipolar disorder and Tourette’s Disorder.

The Eleanor I. Leslie Term Chair in Pioneering Brain Research 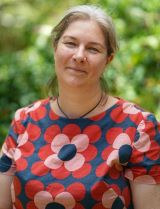 Samantha Butler received her B.A in Natural Sciences from Cambridge University in 1990. For her Part II project in Genetics, she worked in Michael Akam’s laboratory characterizing novel mutations in the homeotic gene, Ultrabithorax in Drosophila melanogaster. She joined Yash Hiromi’s laboratory in 1990 at Princeton University for her Ph.D., studying the genetic mechanisms that establish cell fate in the Drosophila eye. She moved to vertebrates for her postdoctoral fellowship in 1997, joining Jane Dodd’s laboratory at Columbia University to examine neural circuit formation in the developing spinal cord. During this time, she was the first to identify the key role that inductive growth factors can play as axon guidance factors, showing that the bone morphogenetic proteins (BMPs) act as a repellent from the roof plate, directing commissural axons ventrally.

Dr. Butler started her own laboratory in 2004, where she has been exploring how the developmental mechanisms that first establish the neural tube can be reused to regenerate damaged or diseased spinal circuitry. Her laboratory has continued to dissect the mechanisms by which BMPs direct cell fate and axon guidance decisions. Recent findings include showing that BMPs do not act as morphogens to pattern the spinal cord as previously thought; rather, each BMP ligand promotes either progenitor patterning and/or neuronal differentiation to direct a unique range of sensory relay neurons. Dr. Butler has leveraged this understanding to establish the first directed differentiation protocols to derive spinal sensory neurons from mouse and human stem cells. Dr. Butler has also identified a critical mechanism by which the rate of axon outgrowth is controlled during embryogenesis, thereby permitting neural circuits to develop in synchrony with the rest of the embryo. Most recently, her studies have reignited the debate about the mechanism by which netrin1, the first axon guidance cue to be identified in vertebrates, functions in the spinal cord. Work from her laboratory has demonstrated that netrin1 promotes ventrally-directed axon growth not by chemotaxis, but rather by haptotaxis, the directed growth of cells along an adhesive surface. These studies have also suggested that neural progenitors have an intrinsic capacity to form axon growth tracts, an insight might be critical for promoting directed, fasciculated regenerative axonal growth.

My lab is currently investigating the synaptic and molecular mechanisms involved in learning and memory formation in the mammalian central nervous system. Electrophysiological techniques are used to study synaptic transmission in a variety of in vitro preparations but most work concerns the mechanisms responsible for long-lasting changes in synaptic transmission that occur in the hippocampus, a region of the brain known to have an important role in learning and memory. In our experiments we use electrophysiological, pharmacological, and molecular genetic (transgenic mice) approaches to decipher the molecular components of the biochemical pathways responsible for memory formation in the mammalian brain and eventually hope to understand how alterations in these pathways may contribute to the memory impairment that occurs in pathological conditions such as Alzheimer’s disease or even as a result of normal aging.

The Joanne and George Miller and Family Endowed Chair 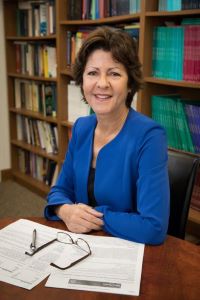 Michelle G. Craske, Ph.D., is Professor of Psychology, Psychiatry and Biobehavioral Sciences, Miller Family Endowed Chair, Director of the Anxiety and Depression Research Center, and Associate Director of the Staglin Family Music Center for Behavioral and Brain Health, at the University of California, Los Angeles. She is also Director of the Innovative Treatment Network and a leader of the UCLA Depression Grand Challenge. She has published extensively in the area of fear, anxiety and depression and has been the recipientof extramural funding since 1993 for research pertaining to risk factors for anxiety and depression among children, adolescents and young adults; cognitive and physiological correlates of anxiety and panic attacks; fear extinction and neural mechanisms of anxiety disorders and exposure therapy; reward processes and neural mechanisms of anhedonia and its treatment; and implementation of treatments for anxiety and depression in primary care and community settings. She is Editor-in-Chief for Behaviour Research and Therapy. Dr. Craske received her BA Hons from the University of Tasmania and her Ph.D. from the University of British Columbia. 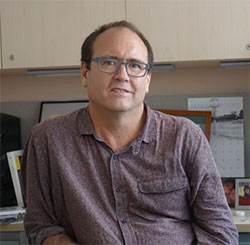 Joel Braslow is a Professor in the Department of Psychiatry and Biobehavioral Sciences and Department of History. Trained as a historian and psychiatrist, his work examines the social, cultural, historical, and scientific context of treatment practices for severe mental illness. His research has ranged from early twentieth-century American psychiatric practices (“Mental Ills and Bodily Cures”) to contemporary policy and care for severe mental illness. Dr. Braslow is the director of Neuroscience History Archives at UCLA’s Brain Research Institute and the American College of Neuropsychopharmacology Center for the Study of Neuropsychopharmacology at UCLA. Dr. Braslow, along with Dr. John Brekke, is the principal investigator of a National Institute of Mental Health study titled “California MHS Act: Impact on Practice & Organizational Culture in Public Clinics”.