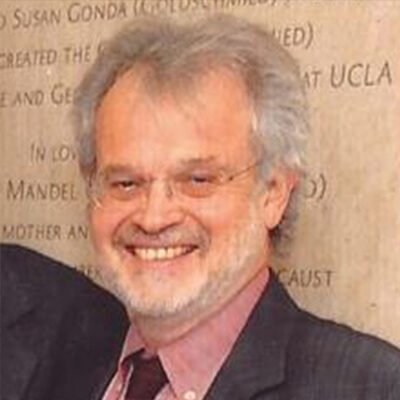 Allan J. Tobin was born in Manchester, New Hampshire, on August 22, 1942. He received his S.B. in Humanities and Science from Massachusetts Institute of Technology, and his Ph.D. in biophysics from Harvard University, in Cambridge, Massachusetts. He completed a postdoctoral fellowship in biophysics at the Weizmann Institute in Rehovot, Israel, and a postdoctoral fellowship in biology at M.I.T. In 1971, Tobin joined the faculty of Harvard University, and then moved to UCLA in 1975 as assistant professor of biology. As part of the effort to consolidate neuroscience within the UCLA College, he moved to the department of physiological science, where he became professor of neuroscience. In 1994, he was concurrently appointed professor of neurology. Tobin was a visiting scientist at the Institut Pasteur in 1982 and at the Université Pierre et Marie Curie in 2002-2003.

Over his 28 years at UCLA, Tobin held varied appointments both at UCLA, and in the scientific community. At UCLA, he was chair of the Interdepartmental Neuroscience Program from 1989-1995, Director of the Brain Research Institute from 1995-2003, cofounder of the NeuroEngineering Training Program, and from 1996 to 2003, the Eleanor Leslie Chair in Neuroscience. He was a member of the Molecular Biology Institute and, of course, the Brain Research Institute. Outside of UCLA, Tobin was also Scientific Director of the Hereditary Disease Foundation and a member of its Science Advisory Board, as well as a member of the Scientific Advisory Board of the Dystonia Medical Research Foundation and the American Paralysis Association (later the Christopher Reeve Paralysis Foundation). He also was a member of the Academic Advisory Council of University of Judaism and of the Neurology C Study Section of the NIH. He also chaired the strategic planning committee on neurodegenerative disorders for NINDS.

Tobin received a number of honors and awards, including the Eleanor Leslie Chair in Neuroscience, the David Gillespie Memorial Lectureship at the Medical College of Pennsylvania and Hahnemann University, Centennial Lectureships at the National Student Research Forum of the University of Texas Medical Branch, the National Medical Research Award to the Huntington’s Disease Collaborative Research Group, a Javits Neuroscience Investigator Award from the National Institute of Neurological Disorders and Stroke, the Shannon Award from the National Institute of Health, a Distinguished Teaching and Service Award from the UCLA department of biology, a Mary Jennifer Selznick Fellowship from the Hereditary Disease Foundation, a fellowship from the Committee to Combat Huntington’s Disease, and a U.S. Public Health Service Postdoctoral Fellowship.

Tobin’s research laboratory at UCLA used molecular and cellular techniques to study the function, regulation, and degeneration of GABA-producing neurons in the brain and spinal cord, in order to address basic mechanistic questions important for Huntington’s disease, Parkinson’s disease, epilepsy, and spinal cord injury. In addition to publishing over one hundred scientific papers, he is the coauthor of Asking About Life, a prize-winning university biology textbook whose three editions sold more than 150,000 copies.

When Tobin retired from UCLA at the end of 2003, Dr. Gerald Levey, then Dean of the School of Medicine, wrote: “Tobin’s leadership over nearly three decades has helped to build UCLA’s neuroscience and brain research programs into the finest in the nation. His skill and hard work as director and as a valued faculty member are recognized and appreciated by all those who have had the pleasure to work with him. Under Tobin’s leadership and relationship-building skills, the UCLA neuroscience community has done much to create a vibrant, stimulating, and productive environment across many campus disciplines. Tobin’s research has spanned diverse areas such as enhancing GABA action, promoting spinal cord repair, preventing diabetes, and devising cell-based screens for neurodegenerative disorders. After devoting more than 28 years of service to UCLA, however, Tobin decided to focus on a single challenge — to find an intervention for Huntington’s disease, the concern that brought him into neuroscience in the first place. He left UCLA to work full-time with the High Q Foundation, an organization specifically created to find interventions for Huntington’s disease. He will be remembered as one of the most cherished and respected members of our faculty.”

In 2003, Tobin joined the High Q Foundation (now called the CHDI Foundation), a privately funded organization dedicated to finding treatments for Huntington’s Disease. His interest in Huntington’s disease dates from 1972, when he attended an early Hereditary Disease Foundation workshop. Since 1979 he has convened more than 250 interdisciplinary workshops and organized several research consortia, including the successful search for the HD gene.