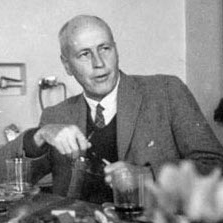 Horace Winchell “Tid” Magoun was the driving force behind the creation of the Brain Research Institute on the UCLA campus in 1959. Twice nominated for the Nobel Prize, Magoun is widely regarded as one of the founding fathers of neuroscience both for his research endeavors and his then radical administrative strategies uniting the major divisions of neural, behavioral and communicative studies under one central banner.

While receiving his doctorate at the Stephen Walter Ransom Institute of Neurology, Northwestern University Medical School, Magoun began an investigative program focused on mechanisms of postural tonus, the hypothalamus and other subcortical mechanisms integrating somatic and visceral functions in homeostasis and emotional behavior. After transferring to Northwestern’s department of anatomy, he further concentrated on brain-stem contributions to the performance of the extrapyramidal motor system and neuropathology of the bulbar reticular core.

Together with Giuseppe Moruzzi of the University of Pisa, Italy, Magoun published “Brain stem reticular formation and activation of the EEG” in the journal Electroencephalography and Clinical Neurophysiology (1949, 1, 455-473). This became a seminal paper on the ascending activating properties of the brain-stem reticular formation and influenced the foundational understanding of neuroscience.

In 1950, Magoun came to UCLA to establish the department of anatomy in the newly created School of Medicine. The department quickly grew as Magoun’s recruitment efforts attracted prominent international researchers who wanted to collaborate with him on advancing investigations on the ascending and descending influences of the nonspecific reticular core. During the five years he was chair, Magoun received numerous awards and lectureships, and wrote the influential monograph, The Waking Brain (1958, Charles C Thomas: Springfield, Illinois).

The collaborative interdisciplinary research led by Magoun in the 1950s prompted him to conceive of a formalized institute that would be the organizational center for neuroscience research, uniting investigators from any branch of science that contributed to the understanding of the brain. In 1959, the Brain Research Institute was officially established. Though the BRI was clearly his brainchild, Magoun’s career was characterized by his willingness to let others stand in the limelight while he encouraged, promoted, disseminated and facilitated their efforts. John D. French became the BRI’s first director.

While still a powerful and recognized authority on the brain and behavior, Magoun turned his talents for organization to administration, becoming dean of the Graduate Division at UCLA from 1962 to 1972. In this capacity, he demonstrated passion and dedication to academic service by developing graduate education standards and programs, recruiting outstanding postdoctoral scholars, and promoting the participation of minority students in higher education. At the same time, Magoun’s activities as a member of the BRI contributed to UCLA’s national dominance in neuroscience, creating a rivalry with older established schools and the sense that the West Coast had overtaken the eastern axis in many of the sub-disciplines of neuroscience. That rivalry still exists today.

Magoun retired from UCLA in 1972 and spent two years at the National Academy of Sciences in Washington, D.C., first as director of the National Research Council’s Fellowship Office, then collaborating on a major report that took the pulse of U.S. personnel needs in neuroscience (Manpower in Basic Neurologic & Communicative Sciences: Present Status and Future Needs. 1997. U.S. Department of Health, Education, and Welfare, Public Health Service, National Institute of Neurological and Communicative Disorders and Stroke).

In 1974, Magoun returned to UCLA to begin an emeritus appointment in the Department of Psychiatry and Biobehavioral Sciences where he developed a division of biobehavioral sciences and advanced its relationships with other university programs. This in turn contributed to the interdisciplinary reach of the BRI, where neuroscience research activities continued to expand.

Magoun passed away in 1991, but his impact continues to be felt in the continued activities of the BRI, the dominance of UCLA neuroscience research, and the annual Magoun Lecture, which recognizes outstanding achievements by the Brain Research Institute faculty.